Roundup: The Latest on Social Media for Nonprofits

In the past few weeks the media buzz about Twitter has exploded.  Even if you’ve never been to the site, now most people have at least heard of it.  Like with the Twitter war between CNN and Ashton Kutcher, it’s mostly been about the numbers.  A million followers?  Wow.

But really social media is not about the number of followers.  It’s not really even about technology.  It’s just a tool that can help you communicate with friends, other people with similar interests and make new connections.

I have discovered some great causes through Twitter.  Some are groups that I’d lost touch with, such as Alex’s Lemonade Foundation, which I profiled back in ’04.  I’ve also connected with some great nonprofit professionals and learned a lot through the resources (i.e. links) that are share.  When someone poses a question on Twitter I enjoy replying to them if I have something valuable to offer.  And of course I also post links to my articles and updates with what’s going on here at Step by Step Fundraising too.

Another big news items about social media recently was the Washington Post article To Nonprofits Seeking Cash, Facebook App Isn’t So Green.  This sparked quite a bit of debate.  The Tech Hermit wrote a great response called Washington Post Rehashes Year-Old Facebook Fundraising News and links to other opinions as well.

The latest theme of the Nonprofit Blog Carnival was Raising Money Online. Sandy Rees’s hosted it at her Get Fully Funded Blog. There are quite a few links to information about how nonprofits can have an effective web presense and raise funds online, as well as social media.

In addition I’ve been bookmarking articles and blog posts about social media to my Delicious account.  So I scrolled through and found these gems.

Let’s get started with 10 Things You Need to Do Prior to Diving into Social Media by Rebecca Ruby Higman, posted at Network for Good (Fundraising123.org)

And Twitter Has Gone Mainstream. Should Your Nonprofit Jump on Board? from by Britt Bravo, posted at My Social Actions

Looking for examples of good social media strategy? Here are 5 Events That Have Used Social Media for a Good Cause from Gradon Tripp and Matthew Knell, co-organizers of Social Media for Social Change fundraiser to benefit City Harvest.

A list of resources for web 2.0 for nonprofits is frequently updated by DIOSA Communications.

Online and social media are just one piece of the pie.  Traditional publicity is still important. Abny Santicola gives us Six Best Practices for Balancing New and Traditional Media posted at Fundraising Success. 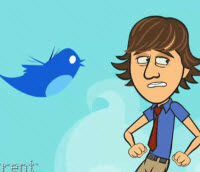 For a global perspective: How to Use Social Media to Champion International Causes from Dana Oshiro at Mashable

If you are on several social networks it can be a juggling act.  Here are Strategies for Nonprofits: Managing Multiple Online Communities posted at Idealist.

And nothing to do with nonprofits, but just for fun… A Twitter Cartoon To Mock Your Existence. (That’s where I got the image at right.)

I meant to include this big news in the original list, where did it go? Hugh Jackman Reveals $100K Charity Donation Mashable includes the radio announcement

Paula Wasley of Philanthropy.com reports on a Twitter Competition to Raise $1-Million for Charity.