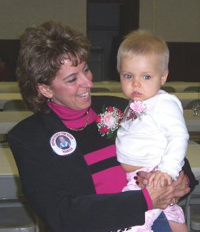 Autumn Michels, a bright and beautiful baby girl, was diagnosed with a brain tumor in January 2004, when she was just 7 months old. Her doctors recommended chemotherapy, so she is currently going through 62 rounds of chemo.

Anne Champine-Michels, Autumn’s grandmother, wanted to do whatever she could to help her son and his daughter on the long road they have ahead of them. Finances are always a concern with a illness such as this, as there are always expenses that insurance does not cover. Anne talked with the family and her friends and got the idea to do a fundraiser to help out.

Anne contacted me earlier this year with some questions about how to pull off an event like a spaghetti dinner fundraiser. I could tell from the start that she had the determination to make this work. Her heart was really in the right place to help her granddaughter who, as Anne says, is “just a little angel and definitely a trooper to all of this.”

The cost of the dinner was $7.00 at the door, so no dinner tickets were sold in advance. Desserts were included in the meal as well as coffee or punch.

Having additional fundraisers at the dinner event was crucial to the success of the fundraiser. Many times, as in this case, more money is made from side fundraisers rather than the dinner tickets.

Anne choose to do a series of raffles. “I went to a printer for our raffle tickets which they donated. My girlfriend and I hit the pavement for donations, going anywhere from a oil change to writing letters to casinos, sports organizations to cedar pointe. It was amazing the turnout of donations we received. I had family and friends selling the raffle tickets which were a 1st, 2nd and 3rd prize. Besides the main raffles we were doing close to 120 raffles during dinner.” 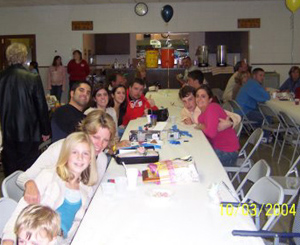 In total 297 supporters attended the dinner. The family was amazed by the kindness and generosity of the people who attended, some of whom they didn’t even know. Nearly $20,000 was raised, approximately $3,000 from the dinner and $16,000 from raffle ticket sales. The rest came from “extra” donations. All the gifts were much appreciated and will help provide for the care of Autumn and her family as she battles this terrible disease.

Autumn’s dad created a beautiful “thank-you” video for Anne and all the people there. Anne comments, “I don’t think there was a dry eye in the entire hall.”

When asked if she had any tips for other fundraisers who would like to do a similar event, Anne said, “Don’t get discouraged by any “no’s ” because for one “no” there are 10 yes’s.”

Thanks, Anne, for sharing your amazing story with us! Our thoughts and prayers will continue to be with you, Autumn, and her family.