Will You Be Running a Raffle in 2011-12?  If so, check out the e-book from Sandra Sims and Jim Berigan.  Raffle Secrets is 50 pages long and comes with three free bonus e-books. Excellent content from authors you’ve known and trusted for years!

I field questions about raffle fundraisers quite often.  Especially since the downturn in the economy and housing crisis, I have heard from several people who want to raffle their own house.  It won’t sell on the real estate market so why not raffle it?

The first reason not to do a house raffle, is that in most cases a raffle must benefit a charity.  So the first hurdle is that you have to either be willing to donate your house to a charity that actually wants it, or is willing to buy it from you.  Neither option is probably appealing or easy.

The laws governing raffles and any “game of chance” very by state, and sometimes by county or city.  In other words, first look up the state laws, (if you live in the US) then contact your local government to see if there are additional restrictions before proceeding with any raffle, house or otherwise.

Unfortunately the legalities around raffles can have life altering consequences if not followed. Penelope and Joe VanDevelder of Waterford, Michigan decided to raffle their own home after a disappointing two years on the market.

Their plan was even featured on major news outlets, including MSNBC online and national morning television shows.  Then once authorities found out about the raffle, the couple had to shut it down and refund all of the tickets.

I truly feel compassionate for people who are going through this tough real estate climate.  With perseverance and a bit of luck, the VanDevelders and those in similar situations will find other options to avoid financial crisis. 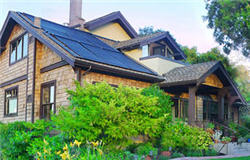 While it’s unusual, there are charities who do house raffles with great success.  One major difference however is the type of house being offered.  Houses that are great prizes are not generally potential foreclosure situations.  In fact the houses that are offered as prizes are more like mansions.

There’s a “Dream Home” raffle going on right now in California for a $2 Million dollar home that overlooks San Francisco Bay.  The proceeds from the raffle will benefit Community Action Marin a private non-profit social service agency that helps the poor and disadvantaged people in Marin County. This amazing house raffle could be a dream come true for the prize recipient.  Like any prize of that size the taxes that the winner would have to pay could be astronomical.  Like the winners of the HGTV Dream House Sweeps, they would likely sell the house, pay the taxes and keep the cash left over.  Which would still be a a wonderful prize!

So could your non-profit offer such an amazing prize for your next raffle?  If you’d like to have a house raffle, or other big prize like a car or big-time cash prize, it will take a lot of work to make it profitable.  The Marin County house raffle, like other house raffles that I’ve seen, has corporate sponsors to underwrite the costs.  Publicity, advertising and perhaps direct mail or in person sales would also be required to sell the number of tickets needed to make the fundraisers worthwhile.

And after all that’s been said about legal issues, a fundraiser with a prize that size would need to be reviewed by an attorney experienced in such cases.   Insurance may also be another issue that you’d need to consider.

For charities who have the ability to plan and execute a fundraiser of that scope, a house raffle could be a viable way to raise money.  But for home owners who would like to sell their home, in 99% of cases, a house raffle is just not an option.