On February 12, 2005 the Business and Professional Women of Wichita Falls, Texas held its First Annual Valentines-N-Vegas Casino Fundraiser. Each year the Wichita Falls Chapter of Business and Professional Women awards scholarships to women who want to better their lives by deciding to go back to college. The proceeds from the Valentines-N-Vegas event benefited this scholarship fund.

Of course being a Vegas night, there were casino style games to play including craps, blackjack and Texas Hold ‘Em. Everyone received chips with their entry ticket and additional chips could be purchased if they wished. The dealers at the craps table were regular jokers and made it fun while they taught us how to play the game. 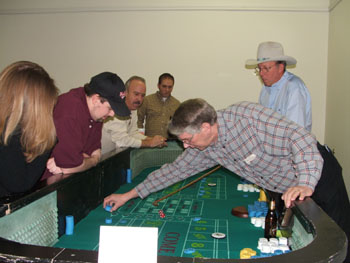 Playing craps at the casino night

Texas Hold ‘Em poker has become very popular in the past year or so. However, because of legal restrictions we were not able to have a cash payout poker tournament. So everyone was just playing for the fun of the game.

Besides the casino games there were other fun things to do at the event. There was a light buffet, cash bar, and a Valentine’s photo booth. There were also vendors there with jewelry and a spa with valentine gifts available. Instead of hiring a DJ, we loaded 5 hours of music onto an MP3 player and hooked it into the sound system. This was an easy way to do the sound, and worked out very well.

Our great entertainment of the evening was a performance by Elvis himself. (Okay, it was really my husband Troy, but he’s a great Elvis impersonator!) He sang “Viva Las Vegas,” “Don’t Be Cruel,” “Burning Love” and “Hound Dog.” Everyone cheered and enjoyed the show. 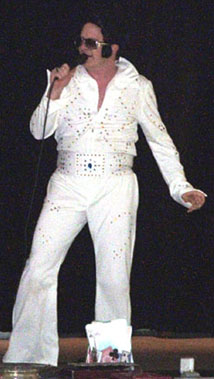 After the performance, the married couples were invited onto the dance floor to renew their wedding vows. This informal ceremony was presided over by Elvis, with special wedding vows. The couples repeated these words to each other:

I [name] will love you tender, love you true
you have made my life complete.
I’ll be yours though all the years,
’til the end of time.

Elvis:
I now pronounce you all
hunks of burnin’ love
You may kiss the bride. 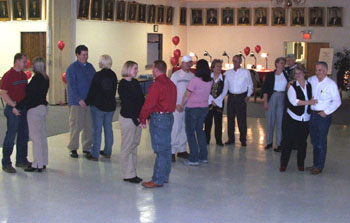 The renewal of vows was one of everyone’s favorite parts of the evening. I’m sure this will be including again next year.

After the entertainment, Meredith Kennedy, Vice-President and Finance Chair, announced that the silent auctions would be closing in 5 minutes, so everyone could get in those last minute bids. If you have ever been to a silent auction, you know there are always a few people who “stake out” the items they want, and we had some of those. And for good reasons, there were great prizes at the silent auction: jewelry, designer sunglasses, a gym membership, a wine basket and more.

We also had Valentine mystery grab bags, which were priced between $1-$20. Most of the items inside the bags were gift certificates for local restaurants, or services such as hairstyling. Most of the bags were priced at half of the actual value of the items, so it was a good deal for anyone who bought a bag. Gift certificates are some of the easiest items to get donated,
and this was a great way to utilize these donations.

Finally, the big prize of the night was a trip to Shreveport, Louisiana (a city also known for casinos). This was our door prize, and everyone who came to the event got one entry into the door prize drawing. The winner was drawn from the “hat” and announced. When Melinda Seyler heard her name, she yelled, jumped up and ran to the stage. She was very excited to win that prize!

We started planning the event in November of 2004. Because of the Christmas holidays, we had some slow downs during that time. However about six weeks before the event our planning really picked up, with meetings each week. Each person on the committee was a sub-chair, in charge of a specific area such as food, publicity, prizes, corporate sponsors and decoration and our club president and treasurer were alson on the committee.

Each year Wal-Mart donates $1000 toward our scholarship event. However, this was the first year that BPW solicited other businesses for corporate sponsorship. This is the area that I was a sub-char for. The process began when I received a list of around 200 businesses from our president. Our finance chair, and head of the event committee, wrote and signed the request letters.

We decided on four possible sponsorship levels: $250, $500, $1000, and $1,500 for a title sponsor. When soliciting business partners its important to give the sponsor a tangible benefit for their support. Each level received free tickets to the event, additional tickets for each increasing level of sponsorship, and advertising at the event. Each packet that was mailed contained the request letter, a sponsorship form, a response envelope and a flyer about the event. We followed up on the mailings with telephone calls to potential supporters.

The corporate sponsorship drive resulted in 5 sponsorships in addition to the grant from Wal-Mart. Some of the sponsors were BPW members, or friends of our organization. All sponsored at the $250 or $500 level. The funding provided by the sponsors covered all of the expenses for the event and then some.

We learned a lot that will help us plan next year’s event. It would be best to start planning earlier, at least 6 months in advance. Corporate sponsors, especially a title sponsor, should be secured farther in advance so that sponsor names can be included on invitations and other advertising. We also discovered that potential donors for larger prizes such as trips, needed at least three months advance request.

After calculating all of the ticket sales, silent auctions, corporate sponsors and other revenues, the event raised $2300 for the scholarship fund. The Valentines-N-Vegas night was a lot of fun, and raised money for a good cause.

Notice to Readers: Casino nights sometimes fall under the heading of gambling in certain states or locations. (For example in Kansas Casino nights are prohibited.) Please check with the government authorities where you live before planning this type of event.