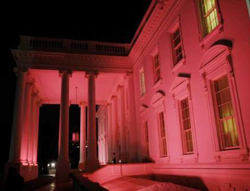 Last night, I tuned in to watch the second Presidential debate between Barack Obama and John McCain. Before the event got underway, the Newschannel I was watching cut away to a live shot of the White House.

It was late enough where the sun had gone down, and the executive mansion was all lit up. However, it wasn’t the usual bright white light that we normally see. Rather, from 7:00pm to 11:00pm, the White House was bathed in a stunningly vibrant pink.

Before the reporter had a chance to explain, I immediately thought it was a red state-blue state kind of trick. (I think I’ve been watching too much CNN.) But then the reporter explained that the White House allowed itself to be turned pink for the evening in support of Breast Cancer awareness.

My mood instantly changed from political suspicion to professional admiration. I’ll admit, my own fundraising efforts have always been on a much smaller scale than national breast cancer research, but I still gotta think that getting the White House staff to agree to let one of the most famous buildings in the world be turned pink for an entire evening was no small accomplishment.

I don’t know if that kind of a thing has ever been done before, but I am very impressed by the vision and the gumption of the breast cancer fundraising /marketing team. (I also think their “Save the Tatas” campaign is brilliant) I can just imagine a group of people sitting around a table, brainstorming ways to get their message out there. I’m sure the person who came up with turning the White House into the “Pink House” was stared at curiously for a few minutes. But now, I’m sure this man or woman is hailed as a hero in the movement.

The grandeur of this move got me wondering. Are we, at the local fundraising level, thinking too small? Are we so trapped in the school carnival to cookie dough to golf outing to auction treadmill that we have stopped looking over the horizon for something really big and impactful? Granted, I don’t think we’d be successful in changing the White House into our school colors, but maybe there’s a local landmark we could put our stamp on. Who knows what it is? The goal is just to think about the unbelievable, the impossible and go for it.

I challenge you to take a few minutes and start day dreaming. Let your mind really go. Have fun in how crazy your ideas can get.

In your local community, what would really make a huge impact? What would make people stop on the street and say “Wow, I never would have thought that would be possible.” What would get the local televsion crews out in full force to capture the moment of awe?

If you are able to do something on that scale, your organization will definitely reap the benefits.
So, go and think up something pink!