The parents commission at our school started very early this year planning our fundraiser. As we live in an island in the Caribbean, we organized a Carnival event which was held on Saturday January 22, 2005. Our school is celebrating it’s 50th Anniversary so it was a good opportunity to do something great with the kids and parents and try to get some funds out of it.

We are a very colorful culture, it’s a very nice island just in front the coast of Venezuela, with the best port in the Caribbean and plenty of original conserved historical buildings.

We are a Dutch colony, and the official language at schools and government documents are in Dutch. On the streets we talk our native language which is called Papiamento, a mix of African, Spanish, English, Dutch and Portuguese. Between the ages 4 and 11 kids at school get lessons in Dutch and Papiamento and at the age of 11 kids start learning other additional languages such as Spanish and English. At High School you have also the choice to follow French and German lessons if you wish. As you may see we are a very multi-language culture. You can find out more about the island of Curaçao at: curacao.com

This is the Big Party of the island. During the whole year groups consisting of 100 members or more start organizing all kinds of fundraising (car wash, parties, selling of T-shirt with group logo etc) to get money for Carnival costumes. The cheapest costume to participate in the Grand Parade can be +/-USD 285.

Our Carnival is celebrating this year it’s 35th Anniversary. Before that time carnival was only celebrated by wealthy people and in private clubs in the island. In 1970 a special organization called “Carnival Foundation ” was instituted. This arranged for a well organized Carnival in the Streets of Willemstad, our capital. Since that time our Carnival has grown enormously. It’s the party where rich and poor people
meet each other and dance in the streets as two good friends. You can find out more about Carnival at: karnaval2005.com

The lighting parade lasted for 1 hour and 20 minutes. We started at 6:30pm and we walked around our neighborhood with the kids, parents, family, friends and with good music. We walked very slow in the streets of the neighborhood in order for the 1st, 2nd and 3rd graders not to get tired and that they could pick up with the parade. Distance covered was 3km.

We had two D.J.’s on a truck and they were playing old road marches/ carnival songs. Kids and parents jump and dance the whole way. Dancing in the streets is commonly called Jump Up, and if you are dancing the premises of a building is called Jump In. We organized a combination of all three: Lighting Parade, Jump up and finish it with a Jump In.

During the Jump In, the D.J. continued playing in the premises of the school and we sold all kinds of Fresh Drinks, Beer and Food.

The money was raised by the sale of T-shirts, drinks and food. We printed 575 T-shirts which we sold for $3 US for the students and $6 US for parents, friends and family who wished to participate in the Lighting Parade. 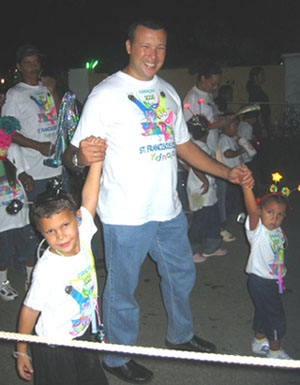 Rosa’s husband Edward and kids at the Parade

On the last day of school in December before Christmas vacation the Parents Commission prepared a letter in which they informed the parents regarding the Lighting Parade and at the same time we wish them all the best for Christmas and New Year.

On the first week of January we issued a new letter with all the details and at the bottom of the letter there was an order form for the T-Shirts. Parents filled in this form mentioning the number of T-shirts they wished to buy and the sizes they wished to get. Money and forms were turned in by January 12, 2005. Ordered and paid T-shirts were delivered at each class to the respective kid on January 21, 2005.

We also organized a sale of lighting/ glowing articles at school on Friday and Saturday. The profits obtained out of the sales were commission for our organization. We also promoted the activity thru the local radio station and newspaper in a special Carnival information page they have which is issued every day for free.

We feel the event was a great success. The money we got out of this project was not that much but we learned a lot out of it. It became a successful activity and all parents who participated in it requested to be repeated next year. We have been approached by a hardware shop in the neighborhood that wishes to sponsor our T-shirts next year.