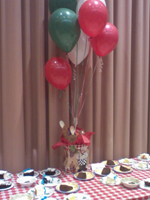 In February this year, the Wichita Falls Texas Youth Symphony Orchestra (YSO) held its annual Play-a-Thon. In years past the event took place at a shopping mall where patrons could listen to the youth ensembles and soloists perform. Funds raised were from sponsorships obtained in advance.

This year the event was transformed into a luncheon with tickets to the event at $10 which were sold in advance. The change of venue was a great success, netting over $3,500.

As soon as I walked into the social hall of the church where the event was held I knew I was in for a treat. This was no ordinary spaghetti dinner. Tables were decorated with Italian themed baskets, balloons and traditional red and white checked table cloths. There was a festive atmosphere where everyone seem to be having a nice time.

Staying true to its Play-a-Thon roots, Youth Orchestra members performed during and after the meal. Instead of performing a concert, students played in informal groups. Those in attendance were free to mingle with friends and browse the silent auctions while enjoying the music.

I recently spoke with YSO Executive Director Juliana Lehman about this event. “Once we had booked Toscani’s as the caterer we went with the Italian theme. One parent volunteered to do all the centerpieces and another did the tablecloths. It came together really well.”

Next year the YSO plans to continue with the luncheon Play-a-Thon. When asked what she’d do differently next time, Juliana advises, “There were a lot of volunteers who were there and ready to help out the day of the event. But as you know, there’s a lot of prep work that goes into a event. Next time we’ll divide up into 4-5 committees beforehand.”

The most successful aspect of the event in terms of money raised was the silent auction. Find out how they increased their chance for success with creative silent auction baskets.