A Dream Come True at the London Marathon

Firstly let me say the most difficult thing about the event is the training that goes on during the cold, wet, dark winter months! I was slightly fortunate in that I didn’t know I had a place until near the end of Feb – so that cut in half my club’s normal training plan!! So my training was a bit on the “catch up” but I did eventually do an 18 mile run one Sunday on my own which made me feel more confident with 2 weeks to go. The Sunday before the Marathon, whilst all my other club runners were taking it easy, I ran 10 miles in glorious sunshine. As I came along the sea front I suddenly found myself with a big grin on my face and at that moment I knew I would be okay – weird or what?! 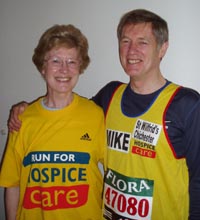 So as we left by train on the Friday for our hotel in Docklands I was quite calm. However on Saturday, as we entered the giant Excel building to register and pick up my number and microchip, you see all the banners, bunting, trade stands, loads of people and that music!! Yes, it was the music that we hear on the TV which introduces the event that made me realise that suddenly this is reality and it’s serious!!

I was in the Red Start area on top of the hill – a 15 minute walk from the station. The first thing on getting there was to find the loos! Needless to say the long queues told their own story. The atmosphere was a mix of light hearted and tense and it became less light hearted as we were told to line up in our groups.

0945am and we were off! Within half a mile there was a line of dense bushes off the road with a long line of men standing with their backs to us – yes, they hadn’t managed to get to the loo in time! Spectators lined the road from the start and did so the whole way around the course. In all, the papers estimated that about 750,000 people lined the route! Quite amazing and it’s quite right when runners say how important the support is.

After about a mile, feeling less tense, a lady runner appeared at my side and asked if she could run with me as I seemed to “know what I was doing” – can you believe that?! I suppose she really meant that my pace was about what she wanted to do. So we stayed together for awhile which was good because she chatted away (how come lady runners can run
and talk at the same time?!!) which made the time fly by.

After about 13 miles, I somehow lost touch with my running, talking partner so I decided not to waste time looking for her and carry on.- a gentleman to the last!! The crowd, bands, pub discos, and the desire to get out of Docklands kept me focused. The pace was still reasonably comfortable – about 10 minutes per mile although my legs were beginning to feel slightly stiff. I was scared of getting cramp so all through the run I made sure I collected water and the energy drinks even if I didn’t finish it. There were even three shower points, which were like car washes. I went through 2 of them twice to cool down.

So to the 22 mile point (already 4 miles further than I had ever run!) but failed to see Wynne and Kirstin and thought “hope they are okay and not lost”. Oh well only another 4 miles or so to go! By now my thighs were feeling heavy and I could feel the start of a blister on my right foot. I also suddenly got a freezing cold sensation on the top of my head! How weird. Anyway, the coldness went after a few minutes and I felt I really had to focus on not tripping up or banging into people stopping or walking.

Along the Embankment the crowds were huge. The noise got louder and louder especially if they saw a runner in trouble. The Embankment seemed to go on forever but I suddenly saw Cleopatra’s Needle then the London Eye so realised the end wasn’t too far away. By now I was doing a 12 minute per mile pace which annoyed me but I knew that if I tried to speed up I would risk cramp so decided not to be daft and aim on finishing in one piece.

Suddenly Westminster Bridge was there so right turn for the last mile and a bit. No sign of Wynne and Kirstin but with so many people, and feeling somewhat jaded and running on auto pilot, I pressed on. The good news was that they did see me there so knew I had survived at least 25 miles! So into the last mile with runners in varying states of condition. I passed one runner who was totally “out” at the 25 mile point – how gutted he must have felt.

Where on earth was that finish? Birdcage Walk, lined with supporters, stretched on and on until a right turn and there, thank goodness, was the finish festooned in banners, balloons etc. What a brilliant sight. Just keep going, don’t try to sprint as you will look stupid falling over 50 metres from the line! Can’t be bothered with being interviewed by TV – just get me over that mat that records the chip that is attached to my laces!!

Done it! Under the famous arch with arms raised in “victory” and knowing I survived. I even did it not only within the target time I set myself but also without stopping! Whoops – must remember to keep walking otherwise you cramp up. Stop on a dais to have the microchip “surgically” removed. Luckily there were no steps up – just a gentle slope. Now collect my medal from one of the Marshals and the “goody bag” that contains that Finishers tee shirt that I must wear when next at the Gym! The “goody bag” seemed to weigh a ton and after collecting my clothes kitbag from the lorry I felt more like a British Rail porter!! 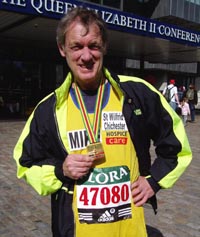 Anyway the weather was perfect so no need to don new clothes. I just put on my running jacket as I staggered under the weight of the two bags in search of the Queen Elizabeth Conference Centre near the Houses of Parliament. This is where the Hospice were laying on a post race reception including a free massage – heaven! Believe it or not I asked a policeman the way and he couldn’t tell me!!

So what a great day. It wasn’t easy but all the hard work in the weeks before meant that I was able to not only run the London Marathon, but also do it in a respectable time. The support before, during and after the race by Wynne was crucial and the support on the day by Wynne, Kirstin and the Hospice was brilliant.

Thanks to St Wilfreds Hospice, I was given the opportunity to realise a lifetimes ambition. Thanks to you I was able to give something back to the Hospice.

About the Author: Mike Monk is a man of many talents, president of his local running club, soon to be retired leisure center manager and a coastguard. He resides in the seaside village of Felpham, West Sussex, on the southern coast of England.