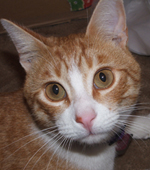 “You can’t teach a cat to bark!” That was the comment from one of the board members. It was a tough meeting. The volunteer board members were discussing with their executive director an important paid staff member who wasn’t meeting the job expectation.

They had sent him to training workshops, mentored him, coached him, re-written a very specific job description, and the person still just didn’t seem to be able meet the requirements of the position. Neither the board nor the executive director wanted to fire this staff person because they liked him as a person, so they were brainstorming about what to do next when one of the board members commented, “You can’t teach a cat to bark.”

Jim Collins, in his monograph, Good to Great and the Social Sectors, outlines five significant issues that frame greatness in the non-profit world. One of those five is “First Who–Getting the right people on the bus within the social sector constraints.” As I listened to the board discuss this staff person, I questioned whether they had the right person on the bus. All the training, mentoring, coaching and motivation wasn’t going to change him.

To paraphrase John Maxwell in Leadership Gold, here are three reasons not to try and get cats to bark.

Many years ago the Springfield, Oregon Public Schools newsletter published an article that sums up my point (as quoted in Growing Strong In The Seasons of Life, Charles Swindoll):

Once upon a time, the animals decided they should do something meaningful to meet the problems of the new world. So they organized a school.

They adopted an activity curriculum of running, climbing, swimming, and flying. To make it easier to administer, all the animals took all the subjects.

The duck was excellent in swimming. In fact, he was better than his instructor was. However, he made only passing grades in flying and was very poor in running. Since he was so slow in running, he had to drop swimming and stay after school to practice running. This caused his webbed feet to be badly worn so he became only average in swimming. But “average” was quite acceptable, therefore nobody worried about it-except the duck.

The rabbit started at the top of his class in running, but developed a nervous twitch in his leg muscles because he had so much makeup work to do in swimming.

The squirrel was excellent in climbing, but he encountered constant frustration in flying class because his teacher made him start from the ground up instead of from the treetop down. He developed “charley horses” from overexertion, so he only got a “C” in climbing and a “D” in running.

The eagle was a problem child and was severely disciplined for being a non-conformist. In climbing classes, he beat all the others to the top, but insisted on using his own way of getting there.

One of the most important decisions that a leader makes is the selection of staff and volunteer leaders. The number one resource for the great non-profit is having enough of the right people willing to commit themselves to the mission. But they have to function in their areas of strengths, talents and time. Sometimes as leaders we have to make the hard decision to fire a member of the staff because that cat will never bark.

Tom McKee is a leading volunteer management speaker, trainer and consultant.  Additional resources from Tom can be found at Volunteer Power.