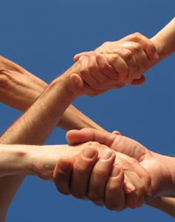 In March I had to pleasure of attending the Run Walk Ride Conference.  Unfortunately I didn’t get to stay for the entire event, but was treated to a day long seminar on local sponsorships.  Corporate sponsorships are an integral part of charity fundraisers such as athletic events, which was the context of this seminar, but also for many other special events.  Galas, auctions, outdoor festivals, and many other fundraisers rely on such partnerships.

The seminar was led by Joe Waters, who is the Director of Cause & Event Marketing at Boston Medical Center.   He gave a great lecture and interactive session.  It was an instant hit with me since Joe approached the topic with practical, step by step information.   Looking at the big picture though, there were two big ideas that I came away with:

1. Sponsor Focus – Many times nonprofits approach businesses only from their self interest.  They need an item for a silent auction, they want a sponsor to underwrite costs for the event, etc.  Knowingly or not this approach can come off to the business as a “gimme” attitude.  When I first started fundraising I was guilty of this tendency as well. I think most of the time people are well-meaning and don’t intend for their request to appear this way.  Sometimes a direct approach works as long as there is some benefit given, but there is a better way.

In the seminar Joe he took the idea of giving benefits to sponsors even further.  To paraphrase, “A sponsor-centric event drives promotion, publicity, revenue and participants.”  His example of this is the Halloween Town community event in Boston.  The proceeds go to Boston Medical Center, but the title sponsor, iParty gets equal billing.   There are built-in opportunities for many other sponsors to be a part.  In this post from October 2008 Joe shares exactly how they put the sponsor focus into action.

2. Creativity – The other big idea that I took away from this seminar was the power of creativity.  In formulating a great nonprofit-business partnership be willing to do something besides the traditional gold/silver/bronze sponsor levels.  Think about what assets your organization has and how you can leverage them to offer the greatest benefits to sponsors.

An event that was structured from the beginning to be sponsor-centric in a creative way was called Retail Therapy. It  benefited multiple stores, the consumers and the charity. Think of it like a mall sidewalk sale on cause marketing steroids.

Most of these stores have agreed to sell a Retail Therapy mobile for a buck. Mobile sales raise money and are a great promotion for the event (as we learned from Halloween Town). Each mobile has a $5 off coupon for a passport shoppers can use during the event to receive special discounts. That’s the second thing each store agreed to do: shoppers that present a passport get a discount or a free item. Most stores are offering a percentage off purchases with nine “flagship” stores offering even deeper discounts and a special gift if shoppers visit all nine.

It cost the stores nothing to participate and they all got the benefit of increased traffic, sales, and the “halo” effect of being aligned with a great charity.  Your event doesn’t literally have to take place at the store to offer a similar benefit.   How about giving out your sponsor’s coupons to attendees as they buy tickets?  Or adding a special promotion to goodie bags?  With a little creativity your partnership will bring a multitude of benefits for everyone involved. (Plus you will definitely be remembered and appreciated by these sponsors!)

Joe is currently writing a series about how to sell local sponsorships.  I’d highly recommend reading these and following along as the next installments are released.

Selling Local Sponsorships for Nonprofits: Working Inside Out

Selling Local Sponsorships for Nonprofits: Reaching Out to Prospects

Additional articles from other authors can be found at this link roundup: Support from the Business Community